If this set of problems are not mitigated, app piracy through app modification for Windows Store apps will likely become quite prevalent. XAML is shipped as plain text source code.

That makes both forms of code extremely susceptible to reverse engineering. With some light modifications to the XAML and C code we can change the display and behaviour of the app:. The most important asset that app would have are the endpoints for the Microsoft store. In my opinion, apps shipping as part of all app stores will always be vulnerable at some limited level to reverse engineering and modification. Yes , Microsoft can make apps significantly more temper-proof and pile a lot of hardships on those seeking to reverse engineer and modify Win8 apps.

If Microsoft chooses to ignore this problem for the remaining one year?

Ladda ned. Spara som favorit. Skickas inom vardagar specialorder. Windows 8 enables you to build stunning applications that integrate with each other, services, and Windows itself like never before. As a result, it was interesting to see what he did, but it was difficult to really know what the average developer should make of it all.


After some discussion on this subject in the RD community, I decided to follow a more automated approach to assess the situation. As it turns out, framework compatibility is very difficult to assess and individual mileage will vary greatly. I originally had planned to call it Framework Dialects , but that seemed to be too confusing for people, so I somewhat grudgingly ended up calling it XAML Dialect Comparer. You can also pick the namespaces you want to include in the comparison, so you can eliminate those you are not using and that are thus of no consequence to you.

See Figure 1 and Figure 2 for screens shot of the tool and a set of analysis results, respectively. The results are both interesting and yet very difficult to make sense of.

As it turns out, framework compatibility is very difficult to assess in the first place, and on top of it, the result may be more or less meaningful to each and every developer. This is based on two aspects: 1 it is difficult to define what compatible really means in a way that provides a valuable indicator in the real world, and 2 some classes may exist in both compared environments, yet have a largely different set of properties, methods and events, but the majority of incompatible members may be so obscure that they are hardly ever used, resulting in a high level of compatibility experienced by developers even though the measured compatibility may be low.

For instance, Button objects are available in all environments although their properties and compatibilities vary greatly. Nevertheless, most developers will perceive Buttons as relatively similar in all environments. However, if you happen to make extensive use of a more obscure feature, you may perceive compatibility as significantly lower than most developers. Let me give you a few examples as to why it is so difficult to define what compatibility actually means. Consider the Visibility property that is available on practically all controls in all environments. Visibility itself is a class enum that has three states in WPF Visible, Hidden, Collapsed , but it has two states in other environments Visible, Collapsed.

One could thus argue that since that type exists in all environments, you can award compatibility points, and since two out of three states are compatible, you also award points for that as well. But what does that number really mean? So we find ourselves at completely opposite ends of the spectrum! And there is more! Since every conceivable control exposes visibility, do we now dock every single class in compatibility percentage?

Or do we consider the property completely compatible as long as it is there, since we already accounted for the incompatibility at the original class level? Again, individual mileage may vary greatly.

This is just a very trivial example that is repeated a thousand times over with much more complex types. Every type has a Resources collection for instance. What if the capabilities of that collection are different?!? Or what about markup extension classes? If you use DynamicResource in WPF, you will find that WPF is the only environment supporting it out of the box and you might thus find yourself in a pickle.

NOTE : The dynamic resource problem specifically turns out to be relatively easy to deal with in real-world scenarios. What this all amounts to is that you want to take the results provided by this tool with a grain of salt. It only provides a very rough yard stick. However, it does a good job at making one point very clear: The overall level of compatibility between the different UI frameworks available in XAML is quite low. Again, these results vary depending on the exact set of namespaces you pick, and of course WinRT is still changing since it is only in beta.

But it is clear that things will not just be reusable without change or further thought when moving to WinRT. This would have been a nice safety net in case investments into WinRT do not turn out as we all hope. What does all this mean for real-world applications? I have a Silverlight in-browser application used to search for customers and look at some simple customer history Figure 3.

I chose this example, because it is a real-world application, warts and all. And truth be told, since the paradigms used by the two environments are not exact matches, such a conversion wizard would probably create a rather messy result. My next step, then, was to replicate some of the core elements of the Silverlight application.


A simple enough task that resulted in a clean setup of my service proxy. I did, however, take care to give it the same name as in the Silverlight project to give myself a better chance of compatibility. Now I can migrate the actual UI. In Silverlight, the customer search UI is implemented as a user control. 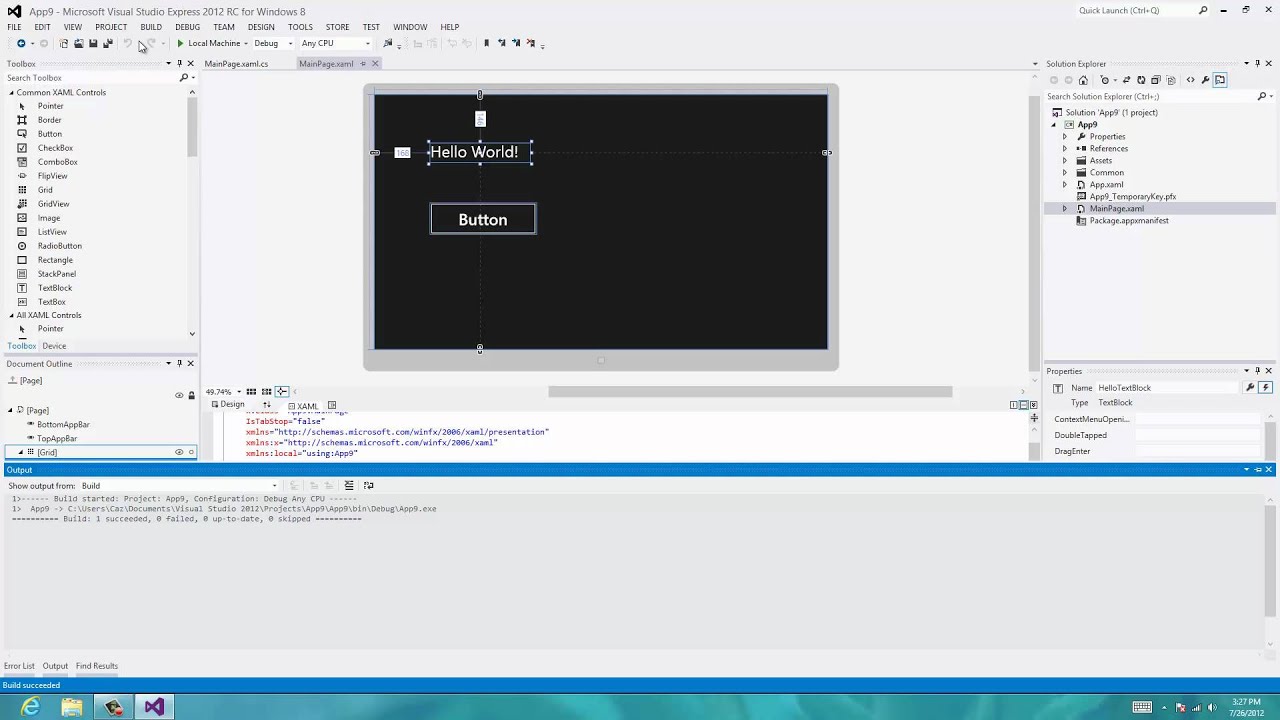 This worked surprisingly well with a higher level of compatibility than I would have guessed especially after looking at the discouraging numbers provided by the XAML Dialect Comparer tool. This is due to a few aspects. For one, the UI is relatively simple, consisting only of a few text elements, a textbox, a button, and lists of data.

For the obvious reason, a more complex UI would have probably faired much worse out of the gate. Secondly, the original UI definition was quite generic and used some best practices. For instance, rather than showing the list of customers and their history in DataGrid controls, the Silverlight app uses styled ListBoxes a technique I personally prefer over data grids for the exact reason we are about to discover. I ended up having to fix up the styles quite a bit, but that is probably not a huge problem in most real-world applications as styles should be shared across multiple ListBoxes, resulting in significant reduction of effort.

These handy UI elements available in WPF and Silverlight are a great way to create a user interface with resizable elements. In the original Silverlight application, this allows users to change the size of the lists. If the user wants to see more customers at once, they can resize the UI so the history grid is smaller, and vice-versa. The resizable columns in both ListBoxes also use GridSplitters.

This is a significant element of the original UI that makes it powerful, yet that element was completely lost in the conversion as Microsoft states manual resizing of any UI is not desired in a Metro environment. I would have still liked to continue using resizing for keyboard and mouse scenarios, which are equally supported by Metro. But alas! This option is not available.

Conversions from one paradigm to another are notoriously difficult. This way, users can still choose what part of the UI they want to see the most of, without having to fiddle with touch-UI resizing.